Miles looked shocked. “I don’t think we need to do grocery shopping this week!” 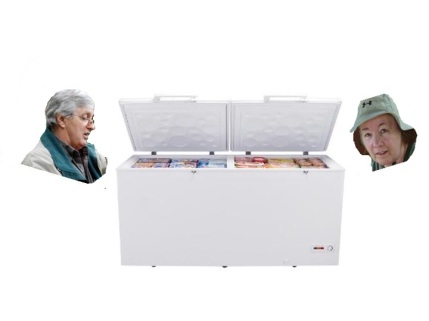 My husband and I were gaping at a giant chest freezer so full I doubted we could fit one more frozen hamburger in it. We had just finished checking out the refrigerator and the pantry, also bulging with foodstuff, fuller than I could remember seeing them in recent years.

I continued gaping at the freezer. “I guess not.” I raked my hand through my hair and frowned. “My characters are still on their illusory trip, so they evidently haven’t been eating here this week.”

Miles turned to me, the emotions flickering across his face clearly showing concern warring with hope. “They’ve been gone a long time now. Are you sure they’re coming back? Maybe they found their way back into the manuscript. Or maybe they like wherever they went on their trip better than they liked living here with us.”

I sighed and chewed on my lower lip. I knew Miles would be happy if my characters disappeared and left us to enjoy a normal life, but they had given me no reason to believe they were leaving forever.

“Honey?” Miles put his hand on my arm.

I sighed again. “Well, I don’t have any answers. I guess we just skip the grocery shopping until next week. We’ll see if they’re back by then.”

Miles nodded. “Well, if we don’t have to go grocery shopping today, maybe I can get the garage cleaned out. I’ve been trying to get that done for a while now, but there always seems to be other things that interrupt our schedule.”

“Yeah, there always seems to be something going on. With my characters gone, maybe I’ll be able get some writing done today.”

On my way to my office I glanced into the conference room and stopped dead in my tracks. It stood empty now, as it had when I had looked there for my characters just a few days ago, but I noticed something new. On the floor under the window was a large, black feather.

My mouth went dry, and my mind conjured the image of a large, milky-eyed grackle, the familiar of the most dangerous wizard any world had ever known. https://margecutter.wordpress.com/2016/05/29/the-keys-part-4-the-mystery-resolved/

But that’s impossible! I told myself. We eliminated the threat of Morcant years ago. I shook my head and crept cautiously over to examine the feather. I laughed. It wasn’t a feather at all, just a shadow on the floor.

Ever since my characters had departed for their illusory trip, I had been jumping at all sorts of shadows. I felt as if I was being watched, even thinking I caught movement out of the corner of my eye several times. Then, a few nights ago, I thought I had seen a huge pair of eyes watching me from the ceiling of my bedroom. https://margecutter.wordpress.com/2020/01/05/7507/

It had taken Miles more than an hour to calm me down and convince me it had been just a dream. Still, I couldn’t shake the uneasy feeling of being watched.

I told myself to snap out of it, that it was all my imagination. I went to my office and sat down at my desk. I turned on the computer, and waited for the old machine to boot up, a process that seemed to take longer every day. I started daydreaming.

I tried to picture my characters on their illusory trip. Where would they have gone? The mountains? The beach? Some fantasy world of their own design? Or perhaps Miles was right, and they were not on an illusory trip at all. Perhaps they had found their way back into the manuscript.

They would be so happy back home. My Foreman and the lads would be back on the horse farm belonging to my Young Hero’s father, with its miles of white-washed fencing enclosing emerald green pastures. Sorceress would be back on the lush tropical island where her people lived in relative isolation. Dragon would be back in her beloved desert, basking in the vast, scorching sea of sand dunes with the jackals and scorpions, never needing to warm herself by her illusory fireplace. And the others? Where would the others be? And would any of them miss Miles and me? Would they even remember us?

I wiped a tear from my eye and dragged myself from my bitter-sweet musings and glanced over to see if the computer had finished booting up yet. I screamed. A pair of eyes filled the computer screen. 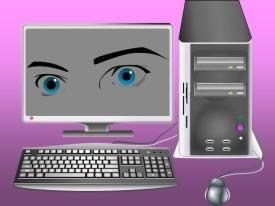 Miles came running down the stairs and into the room. “Honey, what’s wrong?”

I pointed. Miles looked at the computer, then looked at me questioningly. The monitor displayed only my usual desktop, a picture of a Bald Eagle I had taken a few years ago, surrounded by various icons.

Am I imagining things, or is someone watching me? Will my characters return from their trip and help me investigate, or are they gone forever, back into the manuscript from which they fell, or in some illusory world they like better than this world? Be sure to come back and watch as this mystery unfolds. We’ll leave the porch light on for you.