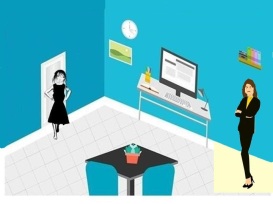 Cleric popped into my office for the third time that morning. “Have you heard from Anna yet?”

I folded my arms in front of me and frowned. I was tired and cranky. It had been a late night followed by an early morning, and I had a lot of work to do. I glared at Cleric. “What did I tell you the last two times you asked?”

“Ummmm…you said you would let me know as soon as you heard?” Cleric blushed and lowered her eyes.

I continued glaring. “And did I let you know anything?”

Cleric looked up and furrowed her brow. “Well, no, Mistress. That is why I am asking.”

I groaned and raked a hand through my hair. “Did it ever occur to you that I have not yet let you know anything because I have not yet heard anything?”

“Maybe I should come back later.” Cleric beat a hasty retreat.

“Yes,” I called after her loudly. “Maybe you should come back after I let you know I heard something!”

“Eh, now how kin ye be lettin’ tha lass be knowin’ ye been hearded summat iffin she do na be comin’ back?” My Old Dwarf entered my office and plopped himself down in a chair opposite me.

“Why are you bothering me?” I scowled at the old reprobate as he reached into his pocket and pulled out a half-eaten sandwich.

The dwarf gave me a look of pure innocence. He took a big bite of his sandwich and talked around the mouthful of food. “I be botherin’ ye, lass?”

“Ye be, er, I mean you are.” I averted my eyes and tried to ignore the bits of food that spewed onto the dwarf’s beard as he chomped his food open-mouthed. “What do you want?”

“I jus’ be wonderin’ wot been happenin’ las’ night at thet auction place ye an’ tha udders been off ta.”

I heaved a big sigh and gave him the short version. “Anna got a pony for Colton.”

I glowered at the rotund figure. “Why do you want to know?”

I heaved a bigger sigh but decided the only way to get rid of the dwarf and get back to work was to give him the rest of the story. “Okay, do you remember Colton, the boy whose pony showed up here several years ago?” 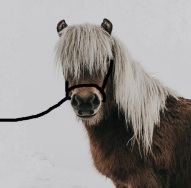 “That’s right, the one whose name was actually Peaches. She was a therapy animal, specially trained to work with Colton, who is blind.” https://margecutter.wordpress.com/2018/03/25/mystery-solved/

The dwarf nodded and took another big bite of his sandwich.

“Well, shortly after we received the news that Peaches had died, Cleric had a dream. In the dream, Peaches told her where to find another suitable pony for Colton.” https://margecutter.wordpress.com/2019/05/05/a-new-mystery/

“So’s ye been tellin’ Colton’s mam aboot tha dream, an’ she been getting’ tha pony fer her laddie?”

I shook my head. “No, we couldn’t tell her about the dream. We could never explain that. But we did get her to go to the auction with us.”

My Old Dwarf grunted and stuffed the last bite of his sandwich into his mouth.

I finished with another sigh. “Since it was so late when we finished getting the pony settled, Anna decided to wait until today to tell Colton about it. She said she’d give me a call later today and let me know what happened.”

Just then, Cleric peeked into the office again. “Any word?”

Before I could explode, my Old Dwarf jumped up and hustled Cleric away, scolding her loudly. “Iffin tha lass been hearin’ anythin’, she been tellin’ ye. Now, ye do na be botherin’ ’er no more taday. She be busy.”

I rolled my eyes, shook my head, and tried to get back to work.

When the phone finally rang about a half-hour later, I checked the caller ID and snatched up the receiver.

“Anna! What’s the good word?” I held my breath, hoping that Colton had been pleased with his new pony.

“Sorry, Marge, there is no good word today.” The voice on the phone was weary. “When I told Colton at breakfast this morning I had gotten him a new pony, he threw a fit.” Anna did an impression of Colton’s voice. “How could you do that? Peaches can’t just be replaced! She wasn’t a saddle or a truck or a pair of shoes. She was family!”

Anna paused, then continued in a normal tone. “And then he stormed off and locked himself in his bedroom. I could hear him in there crying for over an hour.”

“Oh, Anna, I’m so sorry! I knew it would be hard introducing a new pony so soon after he lost Peaches, but I didn’t think he would react like that. He didn’t even go out to meet Blue?”

I apologized again. “Is there anything we can do?”

I heard Anna sigh. “No, but thanks. I’ll give it a few days and see if Colton will at least go out to meet Blue. If not, I guess I’ll have to return the pony to John.”

After promising to let me know if anything else happened, Anna hung up, and I went off in search of Cleric.

The aged dwarf led Cleric into the conference room. He looked into her cornflower-blue eyes, wet with unshed tears, and he spoke gently to her. “Now, lassie, yer heart be in tha right place, but I do na be thinkin’ thet ye be thinkin’ this through.”

“Wha . . .what do you mean?” Cleric hiccupped with the effort to control her tears.

Cleric’s brow furrowed. “Why not?” 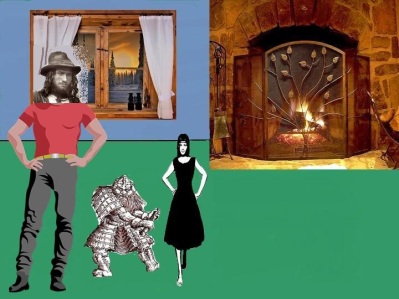 Before the Old Dwarf could answer, the conference room door opened. The Gypsy lad walked into the room and joined the conversation. “I could not help overhearing . . .”

Ignoring the jibe, the Gypsy addressed Cleric. “I agree with the dwarf. You are not the one to talk to Colton. I am.”

When Cleric started to protest, the Gypsy cut her off. “Look, you may be the one who knew Mystery best, but I think I am the one who bonded with Colton.”

Cleric tilted her head, considering her friend’s words. Finally, she nodded. “Very well. But I will go with you.”

The Gypsy turned to go. “We will take the horses.”

Cleric grabbed his arm. “Dragon released the spell after the trail ride last September. I do not have a horse.” 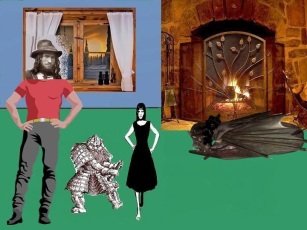 “I will create another illusory horse for you.”

The three companions jumped at the voice. They looked around and saw Dragon shimmering into sight, curled up in front of her ersatz fireplace.

The dwarf gaped at Dragon. “By tha great god’s beard! Be ye tryin’ ta be stoppin’ me heart in me chest? Where did ye be jumpin’ up from?”

Dragon puffed a small cloud of black smoke from her nostrils. “I have found it advantageous at times to remain concealed. Usually that means fewer disturbances of my nap.”

The big beast turned to Cleric. “I presume you want the same horse as before?”

Just two hours later, Cleric and the Gypsy dismounted in Anna’s driveway. In the nearby paddock, Blue studiously ignored the newcomers but Anna’s dapple-gray mare, Rosie, whinnied a loud greeting at their approach. Anna appeared at the barn door moments later to see what was disturbing Rosie. 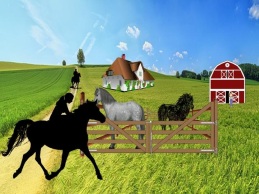 “Clara! Rocky!” Anna called to them, addressing them by the names they had used before. “What brings you here?”

The Gypsy smiled. “We were just taking our horses out for a bit of relaxation on the trail, and we found ourselves on your road. We did not think you would mind an unannounced visit.”

“Of course not! You’re always welcome to drop in.”

“How is Old Blue settling in?” Cleric led her horse over to the fence and reached toward the pony to pet him, but he walked away.

Clara shrugged. “He isn’t a kicker or a biter. When Rosie ran up to him, he just ignored her and walked away. He pretty much ignores me, too.”

“And Colton?” The Gypsy furrowed his brow. “How is he with Colton?”

Clara sighed, and slumped her shoulders. “Colton refuses to come out and meet Blue. I don’t know how to convince him.”

The Gypsy pursed his lips and squared his shoulders. “Perhaps if I talked with him?”

Anna shrugged again. “Be my guest. He’s in his bedroom – upstairs, first door on the right.” 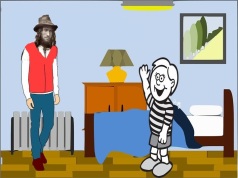 The Gypsy handed his horse’s reins to Cleric and walked to the house. He found Colton in his bedroom, the door wide open. Remembering Colton was blind, the Gypsy called to him before entering the room. “Colton? Hi! Remember me? Rocky? Clara and I were out riding, and we thought we would stop by and visit. May I come in?”

“Sure. I remember you.” Colton sniffled and rubbed at his eyes. The Gypsy could see the boy had been crying. Before he could say anything, Colton turned toward him and blurted, “Do you know what my mother did? She got a new pony for me! It’s as if Peaches was no different than a pair of shoes I outgrew, or a truck that broke down.” The boy balled his hands into fists, and he punched his pillow. “Peaches can never be replaced!”

“Of course not!” The Gypsy sat on the bed next to Colton and put his hand on the boy’s shoulder. “Peaches was very special. She was more than just your pony. She was your friend. Friends can never be replaced.”

“Oh, I do!” The Gypsy’s voice caught in his throat. “My family raised horses. It was my job to gentle the colts once they were weaned. Every year, I made friends with these colts, and every year they left for new homes once I had gentled them.” 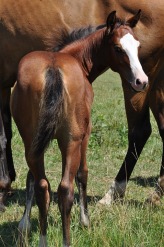 “That’s horrible! You lost your friends over and over again?” Colton’s blind eyes widened.

“I did, but then the next year I would have more colts to gentle, and I would make new friends. I came to realize that none of the colts I helped raise could ever be replaced, but I had enough room in my heart for each new colt that came along. I didn’t stop missing the ones that were gone, but I did make new friends that helped me not miss the old ones so much.”

Colton didn’t say anything for a long time. When he did speak, his voice held a new note of understanding. “You’re saying that this new pony isn’t to replace Peaches, but to help me cope with my loss?”

The Gypsy nodded and smiled. “That is exactly what I am saying. But there is more to it, something you do not know about the pony.”

“Old Blue used to belong to a little girl, a girl who couldn’t walk and had to use a wheelchair. She and Blue were best friends. Blue took care of her the way Peaches took care of you. But a few months ago, the little girl died. Blue lost his friend, and now he’s just as sad as you are. He needs someone to help him cope with his loss, too.”

Colton frowned. “Is that the truth, Rocky? The pony’s owner died? You aren’t just saying that to make me feel sorry for the pony?”

“Colton, I do not lie to my friends.”

Colton paused, and furrowed his brow in concentration. Finally, he squared his shoulders and set his jaw. “Rocky, will you introduce me to the pony?”

“Sure I will, Colton! I have a feeling you two are going to be very good friends.”

Will Colton really give the pony a fair chance? Will Blue give Colton a chance? Be sure to come back next week and see what happens when Colton and Blue meet. I’ll leave the porch light on for you.

5 thoughts on “An Anxious Day”