The four friends hurried down the quiet suburban street toward the split-level house they called home. Three houses shy of their destination, Cleric reached out with one hand and grabbed the ersatz elf maiden, Dragon, by the arm. With her other hand, she snagged Sorceress by the strap of the canvass satchel she carried. “Wait!” She firmly planted her feet and jerked the other two to a dead stop. The dwarf, a few steps behind the women, almost ran into them.

“What is it?” Sorceress frowned and pulled the bag’s strap from Cleric’s grasp, while Dragon shook her arm free and reached around to steady the dwarf.

“What are we going to tell Mistress when we get home?” There was a catch in Cleric’s voice and her face was pale.

“We tell her nothing.” Dragon narrowed her eyes. Her tone of voice invited no argument, a fact that was apparently lost on the panicky Cleric.

“But . . . but . . . Mace and Gloria are planning to murder Mistress Writer and Master Miles!” Cleric almost burst into tears. “We must warn them!”

The dwarf scowled. “I be toldin’ ye, there be no need ta be tellin’ anyone. I kin be takin’ care o Mace and Gloria. Just ye be lettin’ me be gittin’ me axe.”

“Oh, yes, that will solve the problem nicely.” Sorceress snorted, and her words dripped with sarcasm. “If Mace and Gloria are found dead at the hands of an apparent axe murderer, where do you think Deputy Whitewash and her intrepid partner Deputy Dawg will begin their investigation?”

“Deputy whosis?” The dwarf tilted his head in confusion.

Dragon sighed and shook her head. “You do not remember the two Sheriff’s deputies who came to investigate Mace and Gloria’s claim that Mistress Writer and Master Miles were keeping a horse in their garden shed?” https://margecutter.wordpress.com/2018/02/18/more-visitors/

The dwarf scrunched his bushy eyebrows down and stroked his unkempt gray beard. Suddenly, his green eyes widened, and he nodded. “Eh, those two! Aye, now I be rememberin’ ’em!” 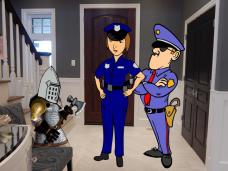 “And I think it safe to say you would not welcome a visit from them, remembering you were brandishing your battle-axe at them the first time they encountered you.” Dragon raised an eyebrow and inclined her head toward the dwarf, who had the grace to blush.

“So then, what are we to do?” Tears threatened to spill from Cleric’s cornflower-blue eyes, as she looked to Dragon for answers.

Dragon furrowed her brow. “Well, we cannot tell Mistress what we heard. That would entail admitting we were trespassing and eavesdropping.” She paused, her eyes narrowed. “I need time to think. For now, we say nothing. We will take turns observing Mace and Gloria – under the protection of my spell of concealment – and we will not allow them access to Mistress Writer or Master Miles. Should they attempt to implement their nefarious plan, we will stop them.”

I was just on my way up the stairs by the front door when four of my characters came trudging into the house, an assortment of flowers, leaves, and branches peeking out of the heavy sacks they were lugging.

“Well, I see your day was successful. It looks like you collected your fair share of botanicals.” I smiled at them.

The four of them shuffled their feet and nodded. Each one mumbled something unintelligible, and not one of them met my eye. They tried to scoot around me, looking as nervous as four long-tailed cats in a room full of rocking chairs.

I planted myself directly in their path, holding up one hand like a cop stopping traffic. “Hold it! What’s wrong?”

My four characters stopped dead, eyes as wide as those of deer caught in the glare of oncoming headlights.

Dragon tried to elbow cleric without me noticing. She failed. “Nothing is wrong. Why do you ask?” She shrugged, and she wore an expression of pure innocence. 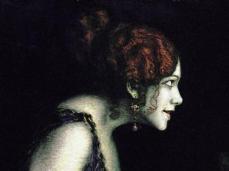 “We are all just tired, and we still need to work with these botanicals tonight, Mistress. After all our hard work procuring them, we must get them preserved them before they start to wilt and spoil.” Sorceress presented a logical discourse, completely at odds with her guilty appearance, as she tugged at her shirt, shifted her weight from foot to foot, and looked everywhere but at me.

“Oh, me tummy! I be eatin’ too many o them apples!” My Old Dwarf’s face contorted with pain and he clutched his stomach. He bulldozed his way past me and scampered down the steps to the conference room, his three companions hot on his heels.

I shrugged but continued up the stairs rather than following my characters in the other direction. Sometimes it’s best not to know, I reasoned.

My husband was at the top of the stairs. “We both missed dinner tonight. I was just heading into the kitchen for a snack. Care to join me?”

Miles tilted his head and furrowed his brow, obviously trying to read my expression. “A penny for your thoughts.”

While we walked to the kitchen for a bite to eat, I told him of the strange encounter I had just had in the foyer.

Miles raised an eyebrow. “Do you think they’re up to something?”

“I don’t know. They certainly acted guilty of something.”

“Well, I’m sure we’ll find out about it soon enough.” He handed me one of the deli-bought sandwiches he had taken from the refrigerator. I took it and sat down at the table. Miles grabbed another sandwich for himself, and a couple cans of soda.

As he sat down next to me, he grabbed a few napkins from the holder in the middle of the table. “Oh, by the way, while you were in your office this afternoon, I walked out and checked the mailbox. We got the normal pile of junk mail, a few bills, a postcard from your sister, and a reminder about the neighborhood get-together next week.”

“The get-together!” I shuddered. “I had forgotten all about that. Do we really have to go?”

Miles shrugged. “Not if you don’t want to, but I think it should be a lot of fun.”

“Are we all invited?” I raised an eyebrow at Miles.

He blinked. “Oh.” He took a big bite of sandwich and delayed his answer while he slowly chewed and swallowed. “I guess I never thought about your characters going.”

“They’d be hurt if we told them they couldn’t go with us, but we can’t keep a tight rein on nine characters all day long. I’d go crazy! And they certainly can’t be trusted to behave appropriately on their own. It would be simpler if we stayed home.” I finished my sandwich and took my plate to the sink.

Miles followed suit. “Well, we’ll think about it later. Right now, Father Brown is on, and I don’t want to miss this week’s episode.”

Bright and early the next morning, the doorbell rang, and I almost collided on the stairs with Dragon, still in her guise of an elf maiden. “I’ll get it!” we said, simultaneously.

I nudged her out of the way and opened the door. I gaped at the smiling young woman, with sandy blond tresses framing an open face, standing on my front porch.

“Hi, neighbor!” The perky greeting took me by surprise. The last time I had seen Gloria was more than six months ago. She and her husband, Mace, had been stomping out of our yard after unsuccessfully trying to find a horse they had accused us of keeping on our property. At that time, Miles and I had made it quite clear they were not welcome to return here without an invitation. https://margecutter.wordpress.com/2018/01/14/the-return-of-the-neighbors/

Since I certainly hadn’t invited Gloria to visit, I crossed my arms over my chest, leaned against the doorjamb, and scowled. Gloria seemed undeterred by my obvious hostility.

“I’m just following up on the reminders the get-together committee sent out this week. We don’t want anyone forgetting about our little neighborhood event in the park next week. Will you and your hubby be there?”

“We haven’t decided yet.” I continued to lean against the door frame and scowl.

“Well, don’t wait ’til the last minute! We need to have an accurate count for seating, and we need to know what everyone’s bringing. We can’t have all desserts and drinks, and no main courses, now can we?”

I raised an eyebrow, and Gloria prattled on.

“I’m making my to-die-for vegetarian/tofu stroganoff. There’ll be plenty of it, so if any of your out-of-town relatives are here then, they’re more than welcome to come with you and your hubby!”

“My hubby and I will keep that in mind. Anything else?” I glowered.

“Nope, that’s it. Just be sure and let the committee know whether you’re coming, what you’ll contribute to the potluck, and how many guests you’ll be bringing. We need to know by Wednesday of this week. See you at the get-together, neighbor!” Gloria twirled and strutted down the walk, presumably off to irritate another neighbor with her way-too-early-in-the-morning perkiness.

I closed the door, turned, and almost walked right into Dragon. Her face was pale, and beads of sweat dotted her brow. Before I could ask what was wrong, she fled to the conference room. I shrugged and went back upstairs to gather laundry.

All of Dragon’s fellow characters were in the conference room, waiting for her to return. Dragon had gathered everyone earlier that morning and explained to those who had not been with them the night before what she and her comrades had overheard in Mace and Gloria’s yard. She explained how Gloria planned to put poison mushrooms in the food she would serve to Mistress Writer and Master Miles. 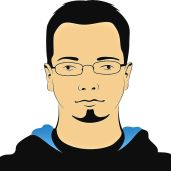 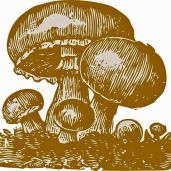 As Dragon raced back into the conference room, everyone looked up.

“That was Gloria at the door. She was checking with Mistress to see if she and Master Miles are planning to attend some neighborhood gathering next week.”

“What’s wrong with that?” Sorceress tilted her head and narrowed her eyes.

“Gloria is making her – and I quote – to-die-for stroganoff for the event. She and Mace are going to kill Mistress Writer and Master Miles at the neighborhood dinner!”

Are Mace and Gloria really planning to murder Mistress Writer and Master Miles at the neighborhood get-together next week? Can Mistress Writer’s characters protect her and her husband? Be sure to come back next week and see what happens. We’ll leave the porch light on for you. But if you do join us, I’d steer clear of Gloria’s stroganoff if I were you!

One thought on “To-DIE-For Stroganoff?”