A New Year, Another Problem

I had not slept well for several nights, not since Christmas Eve, when Miles had made the discovery of a small amulet on the stairs. When he had handed it to me, I could feel all the color drain from my face. It belonged to one of my characters, but not one who inhabited this world with us. I could not imagine how or why it had found its way into this world.

I was sitting at my computer desk, turning the amulet over and over in my hand, and in my mind. The last time I had seen this talisman – before its appearance here on Christmas Eve – it had been in the beefy hands of an Innkeeper in another world, a world I had written about in several books. Since its discovery here, I had avoided showing it to any of my characters, characters who had fallen out of my manuscripts about that world, and who now resided here. I was particularly worried about the reaction the trinket would invoke from my Young Hero, my Gypsy, my Foreman and Cleric. They were all close friends of the Innkeeper, and the appearance of his talisman here in this world would only further fuel their concerns about his welfare.

“Well, I love you, too, honey!” He made a funny face at me and laughed.

“I’m sorry, sweetheart. I didn’t mean it’s just you, like you’re not important. I meant wow, am I glad it isn’t one of my characters!”

“I understand.” He looked down at the talisman in my hand. “Still trying to figure out how that got here?”

I nodded. “I really wouldn’t think much of it if you hadn’t recently taken to talking and acting just like the Innkeeper.”

“Have you come up with any theories?”

I shook my head and raked my hand through my hair.

“Well, why don’t you come upstairs and have some lunch? We’re having the last of the Christmas leftovers, and I think you might want to get to them before your Old Dwarf does. That guy can eat more than any ten people I know!”

I pocketed the talisman and we headed upstairs.

Conversation during lunch took my mind off the talisman. “Master Miles informs us that in a few days, you will be celebrating a new year,” Cleric said as she passed me the bread.

“Yes. Saturday is New Year’s Eve. At midnight, we celebrate the passing of the old year and the arrival of the new.”

“And how do you celebrate?”

I chuckled. “Well, being the old fossils we are, Miles and I will probably go to bed at our normal time and forego the festivities. However, many people attend parties with their friends. Some go to restaurants or clubs or other venues that hold public parties, with music, dancing and food, including champagne with which to toast the New Year. Outdoor events with fireworks or other activities are very common. One of the most famous New Year’s Eve celebrations in our country is televised from New York City. In an event that is attended by well over a million people, and seen by over a billion people worldwide, a huge, specially lighted ball is lowered on a flagpole atop a building at One Times Square at midnight.”

Sorceress cocked her head. “I would enjoy watching that on your magic box.”

Several of the other characters nodded in agreement.

I smiled. “Well, if Miles and I can manage to stay awake, we can all watch it together.”

“I remember the celebrations we had when I was a child, welcoming our new year.” My Gypsy leaned back in his chair, a faraway look in his eye. “First, we had a big feast. Then, the village Wise Woman would tell fortunes. That was followed by music and dancing, which continued right up to the last moment of the old year, when we would creep down to the village stable. 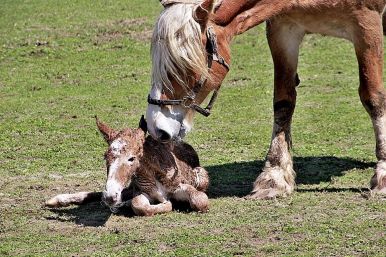 There, all the broodmares most likely to deliver their foals that day were stalled. We would wait, in absolute silence, to see which mare would be the first to give birth. As a people who made our living from breeding and selling horses, we believed whoever owned the first foal of the new year would be blessed with health, happiness and prosperity that entire year. If a mare from each family delivered her foal that day, the entire village would be blessed. Sometimes, the earliest foal would come into the world within the first moments of the new year, but to see if one foal would be born to each family in the village would often take all day, and well into the night.”

My Young Hero frowned. “What happened if no foal was born that day?”

My Gypsy stared at his hands, and his voice faltered. “Tragedy ensues. That only happened once in my memory, the year I turned 12 and thought I was a man. That was the year I caused a terrible thing to happen, and the entire village paid the price for my folly. That was the year two score of the children of our village disappeared.”

Everyone looked aghast, and murmured sympathetically. My Young Hero placed a comforting hand on his friend’s arm. “I am sorry. I had forgotten about that incident. You told me about that once. Your brother was among those children.”

My Gypsy nodded. “I had been searching for him when I came to your father’s horse farm seeking employment.”

My Gypsy shook his head.

My Bounty Hunter gave him a sidelong glance. “It’s such a shame you are stuck here with the rest of us. You have no idea if you will ever find him, perhaps have already found him in our own world.”

I gave him a sharp look. “Let’s change the conversation, shall we?”

“Of course.” My Bounty Hunter sounded apologetic, but I noticed the slight twitch of a smile playing at the corners of his mouth. 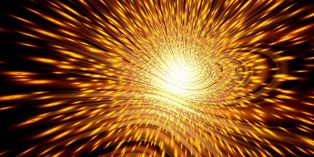 That night was another restless one for me. I drifted in and out of a disturbing dream, in which my Bounty Hunter sat behind the bar, watching as the corpulent Innkeeper was yelling at a bunch of boy-os to keep the Great Room clean. A gang of youthful thugs kept riding horses in and out the front door of his establishment. They intentionally tracked snow and mud and blood all over the freshly scrubbed wooden floors, and chanted “No foals this day, no foals this day! A curse on thee, no foals this day!” The Innkeeper warned them several times that he would not tolerate such behavior but the gang just jeered at him. They repeatedly demanded to know where the Gypsy’s brother was, but the Innkeeper insisted he had no knowledge of the boy-o’s whereabouts. Finally the Innkeeper pulled them all off their horses and reached into his pocket. He produced a small silver talisman, but before he could use it, the hoodlums fell on him, punching and kicking. The big man collapsed under their blows.

I snapped out of the dream, jolted awake. My heart was racing; I was drenched in sweat and panting for breath. Once my heart and respiration rates had returned to near-normal, I looked about. Sunlight was streaming through the window. I smiled. Miles must have realized I had had another restless night, and he had let me sleep in. I dragged myself out of bed and stumbled, bleary-eyed, through my morning routine. I was still yawning and rubbing my eyes when I got to the kitchen, anticipating breakfast. 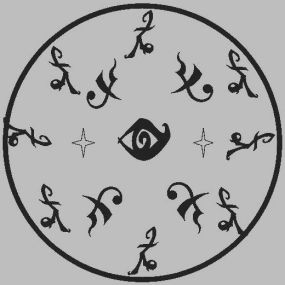 My eyes shot open and all thoughts of food evaporated. Miles was standing there, holding the silver amulet. He was rubbing it and mumbling something I couldn’t quite hear. I launched myself at him and slapped the talisman from his hand. I grabbed it from the floor and swiftly pocketed it.

Miles blinked. He shook his head as if trying to clear his mind. “What . . . what happened?”

“I’m not sure. You had the amulet, and you were rubbing it and mumbling something.”

He gaped at me. “I didn’t have the amulet. You hid it last night.”

“Well, I guess you must have seen where I hid it, because you certainly did have it!”

He reached for my hand. “Honey, I know your Gypsy and your Young Hero were upset by my recent behavior, when I acted and sounded like their friend, the Innkeeper. And I know you didn’t want to discuss this talisman with any of your characters, for fear of upsetting them further.” He paused and drew a shuddering breath. His voice was raw when he continued. “But, Marge, we must discover how it got here. We must know the reason it is here. And we must figure out the connection between me and the Innkeeper.”

I scowled and nodded. “I agree. This is getting more than a little alarming.” I raked my hand through my hair and sighed loudly. “I’ll talk to Dragon later today.”

Two days later, I still had not broached the subject to Dragon. It had been cold and windy all week, with frequent snow squalls. Dragon had taken to sulking about the weather. She stayed curled up in front of her conjured fireplace, growling at anyone who ventured too near. She was much too cranky to engage in civil conversation. Meanwhile, I was still being plagued by strange dreams at night, dreams of the Innkeeper, and I was still trying to keep the talisman hidden from Miles. 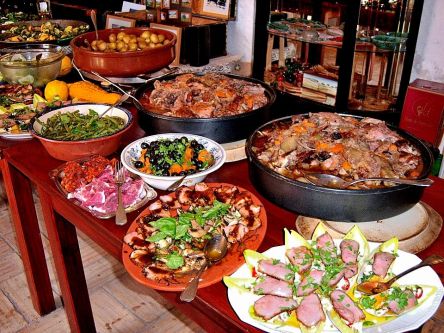 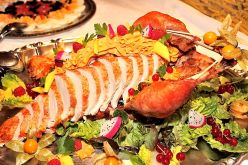 News Year’s Eve, we enjoyed a huge buffet in the kitchen, then arranged ourselves around the television in the living room. I explained to my characters that the New Year’s celebration we would watch from New York was in a different time zone, so the ball would drop at 11 pm Minnesota time.

“Hard to explain. Different parts of our world have different time zones. New York is an hour ahead of Minnesota.”

My characters all looked confused, except Dragon, who nodded sagely. “The sun rises and sets there earlier than here.” Dragon looked smug that she understood what the others didn’t.

We settled in to watch the show. The entertainment was fair, the commercials incessant. Predictably, Miles and I were sound asleep by the time the countdown to the ball drop commenced. Cleric and Sorceress nudged us awake in time to see it drop, accompanied by fireworks, confetti, and balloons. On TV, there were shouts of Happy New Year from the nearly two million people in attendance, followed by a rousing rendition of New York, New York. When the show switched to celebrations on the West Coast, we decided to forgo any further festivities.

Soon after, my characters all went to bed and Miles and I cleaned up the kitchen. Then Miles went down to make sure the porch light was on, and I headed for bed. I almost tripped over a horseshoe in the hallway.

I was still standing there, staring at it, when Miles headed toward the bedroom. I picked up the object and held it out toward him. “What is this doing here?”

Miles took the horseshoe from me and examined it. He pushed an errant lock of hair out of his eyes and smiled. “I told the boy-os not to fret. The Blacksmith will lend a hand. Old Smyth could always be relied on!”

I almost fainted dead away.

Happy New Year from Mistress Writer (Marge Cutter), all my characters, and Master Miles! May 2017 bring you all – old friends and new readers alike – good health, good fortune, grand adventures, and wonderful reading; and may it leave you next year with the fondest of memories! I invite you to come back often and enjoy my characters’ exploits. We’ll be sure to leave the porch light on for you! 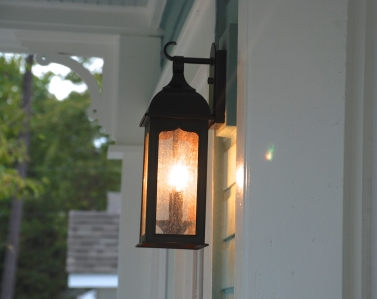 2 thoughts on “A New Year, Another Problem”