I was hard at work on my next blog post when the crack of gunfire shattered my concentration. I jumped up, knocking my chair over, then frowned at my own irrational reaction. No one’s shooting, I scolded myself. Miles probably forgot to turn off the television before he left the house this morning.

I walked up the stairs to the living room. Sure enough, the TV was on, tuned to one of the stations that aired vintage shows. An old Western from more than a half century ago was blaring. As I started walking toward the television to turn it off, I was tackled by my Old Dwarf. “Git down, lassie! Ye be right in the line o fire!”

I pushed my Old Dwarf away and sat up. “What in the name of Fantasy Literature do you think you’re doing?” I screeched. (At least 50% of my communication with my characters, especially with my Old Dwarf, involves me screeching. Before I met them, I rarely raised my voice at anyone. Really.)

“I be savin yer life, thet’s what I be doin’!” he avowed, his jaw jutting out and his eyes flashing.

“Did ye not see em? He be pointin’ thet weapon right at ye!” My Old Dwarf indicated the gunfighter on the television show.

I stood up and brushed myself off, then fixed my Old Dwarf with a flinty glare. “How many times do I have to explain to you knuckleheads that people on the television can not interact with the real world?” (Pretty soon, I won’t know how to converse, save by screeching.)

My Old Dwarf winced and hung his head. He shuffled his feet and rubbed the back of his neck, trying to formulate an answer. Before he could reply, however, the newest character to fall out of my manuscript into the real world, my Bounty Hunter, emerged from behind the sofa. He grabbed onto the arm of the couch and tried to steady his rubbery legs.

“Mistress Writer, are you saying that what we see in that magic box is not real?” he asked, his eyes wide, his voice quavering.

“No more real than you,” I started to reply, but thought better of that contention. I quickly cast about and finally settled on, “It is real, but not in the way it may seem.” That felt like a much safer answer.

“What do you mean?” My Bounty Hunter and my Old Dwarf were wearing matching frowns, and both had cocked their heads at that statement.

I pointed to a painting on the wall, a portrait of a knight and his lady. “This painting is real. The scene the artist painted is a representation of a real place and real people. But, at the same time, it is not real. We can not simply walk into the painting, nor can anyone walk out of the painting into the real world.”

“Be ye real sure aboot thet?” My Old Dwarf snickered.

I shot him a dirty look, and ignored the question.

My Old Dwarf smirked and shook his head, but my Bounty Hunter stroked his chin thoughtfully and nodded, taking some time to digest that information.

“Good. What about you?” I rounded on my Old Dwarf. “Have you got it through your thick skull yet? Or are you planning on tackling me again?” 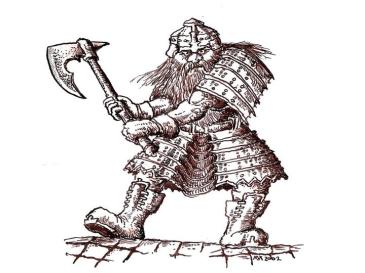 My Old Dwarf’s cheeks burned brightly under his grizzled beard. Before he could reply, my Bounty Hunter addressed me again.

“Mistress Writer? Could you explain something else?”

“This dark-clad man with the strange iron weapon calls himself a Paladin. Yet, he does not follow the code of a true Paladin. Why is this?”

“Well, first of all, he does not call himself a Paladin. Paladin is his name, like mine is Marge and yours is…”

My Bounty Hunter cut me off. “Please, Mistress Writer, do not reveal my name!” He raised a finger to his lips and looked about anxiously. He noticed my Old Dwarf scowling at him. “No offense to you, Dwarf. I was merely thinking there may be others in earshot. I do not wish…a certain person…to know too much about me.”

My Old Dwarf guffawed, but his retort died on his lips as I glared at him again.

“Of course,” I replied, stepping between the two and trying to get them back on track. “As I was saying, Paladin is his name, not his rank or class or calling.”

“But if that is his name, that must be what he is,” my Bounty Hunter objected. “Just as someone who calls himself Miller mills grain, a man called Wainwright builds wagons, and someone known as Cooper makes casks and barrels.”

“Perhaps in your world, but not in the real world, at least not in this day and age,” I explained. “That is how some surnames originated, but in this world one’s name is no longer an indication of one’s profession.” I paused, considering a further explanation. “I do believe, however, the choice of the name Paladin for the character in that television show was intentional. It was, perhaps, a nodding reference to what you know in your medieval fantasy world, as a Paladin, a hero of sorts.”

“Mistress Writer, a Paladin is much more than a hero of sorts!” my Bounty Hunter blustered, his eyes wide and his cheeks red. “A Paladin is a True Hero, a Holy Knight who lives his life by a strict moral code, a Champion who crusades for good and order…” 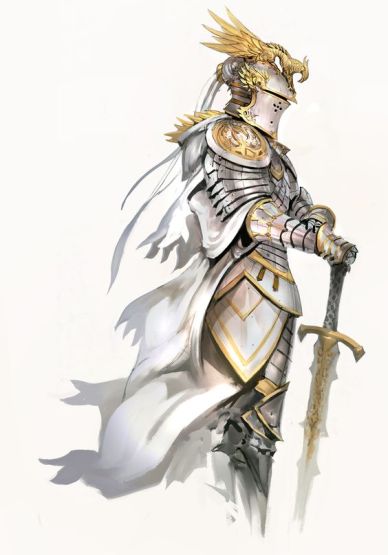 “Yes, yes,” I interrupted him. “I am familiar with the rules by which a Paladin in your world must abide.”

“Well, this…Paladin,” my Bounty Hunter spat the word like poison from his mouth, as he pointed to the television. “He follows no rules! He is an unscrupulous person who often employs chicanery to win his fights!”

“Aye,” my Old Dwarf said, admiringly. “He be doin what needs ta be done.”

“But that’s not right,” my Bounty Hunter objected. “He needs to fight by the rules! He can not employ untruths or stealth or subterfuge. He needs to face his opponent square on, and take no unfair advantage while vanquishing his enemy.”

“Ye’d rather he be lettin’ the outlaws win?” my Old Dwarf challenged, his chin jutting out defiantly, his green eyes flashing.

“If he can not win without violating the Paladin’s code, then he does not deserve to win…or to call himself a Paladin,” my Bounty Hunter insisted, his jaw tightening.

“Ye be a right bloomin’ dolt!” my Old Dwarf retorted, sneering. “The ends always just-o-fy the means! Do na be telling me ye do na use subterfuge, disguises, bribes, or any means necessary ta track and capture yer quarry.” He snorted dismissively.

“Of course I employ those means,” my Bounty Hunter countered. “But I do not try to pass myself off as a Paladin!”

I intervened. “As interesting and enlightening as this conversation is, I need to get back to my writing; that is, if you ever want to find your quarry,” I addressed my Bounty Hunter. “Perhaps we can discuss this more later. For now, do you think you two could just go back to watching the television?” I asked them both. “Without any further ruckus?” I glared pointedly at my Old Dwarf.

“I suppose we can,” my Bounty Hunter replied meekly, and my Old Dwarf nodded in agreement.

As I walked back downstairs to my office, I heard the next show start on the television – Wanted, Dead or Alive. Maybe some of you would like to explain that show to my Bounty Hunter. I’ll bet anything he’ll have a few interesting observations about the way Josh Randall does his job!

I’ll leave the porch light on for you.